Companies use forecasting methods to plan for future demand using time series data.  Often, these time series can be represented in a hierarchy.  For example, products can be broken down to different levels of sales data.  Figure 1 shows an example of a simple hierarchy in which the most aggregated level  is “National Sales” .  The next level has the sales of two different regions and the last level is the most disaggregated, with district sales.  This type of hierarchical structure disaggregates in a unique way, meaning there is only one possible order for the levels of the structure. 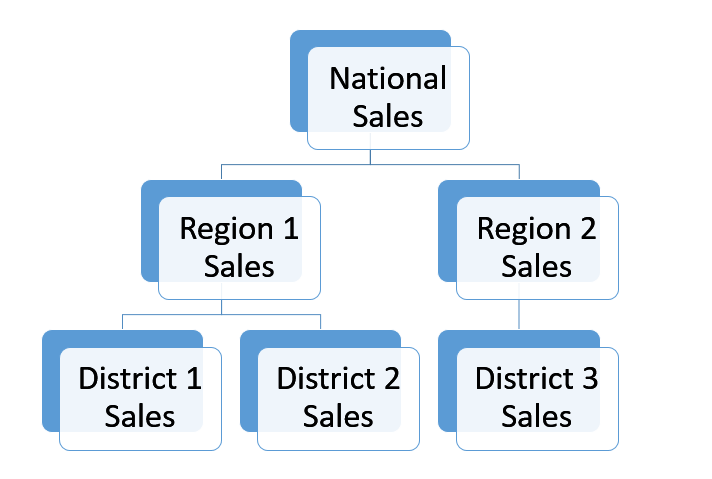 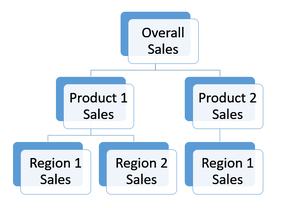 There are three common reconciliation methods to accomplish this: bottom-up, top-down, and middle-out.

However, these approaches rely entirely on the forecasts from just one level of the hierarchy and as a result, fail to utilize all the available information.

Better methods are available.  SAS has developed algorithms for “efficient” hierarchical reconciliation, available in the HPFReconcile procedure and in Forecast Server.  There are also packages in R to perform intelligent reconciliation.  For a recent forecasting project, First Analytics used a package developed by Hyndman to do just that.

Hyndman, Ahmed, Athanasopoulos, & Shang (2011) developed a method that they call “optimal reconciliation”, which handles forecasts for grouped or hierarchical structures.  First, independent forecasts are generated for all nodes at every level of the hierarchy, and then an optimal reconciliation step is used to adjust the forecasts.  The reconciled forecasts are a weighted sum of the forecasts from all nodes, where the weights are found by solving a system of equations with an aggregation matrix that indicates the node relationships throughout the hierarchy.  Hyndman et. al. show that with some reasonable assumptions, this system simplifies and can be solved in the same way as linear regression.  In their empirical comparisons, the authors showed that the optimal reconciliation approach tends to give more accurate forecasts than the bottom-up, top-down, and middle-out methods.

Few companies are using these intelligent forecast reconciliation methods in practice, but that may change as awareness grows.  Even in the well-established practice of forecasting, there is room to compete on analytics.